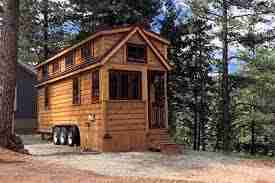 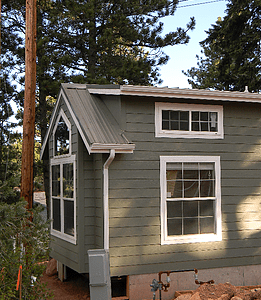 Perched on a mountainside, with a view of Pikes Peak, this community caters to residents in Tiny Houses. Originally an RV park, this community has converted most of its occupancy to Tiny Houses on Wheels and Park Models. While all lots are taken, the few occupied by RVs are not considered permanent residents. So, if someone with a THOW or Park Model wants to move in, an RVer will be asked to move out.

There are about 20 THOWs and 30 Park Models. THOWs are permitted as full time residents because this park was established before zoning rules were put into place.

It is $600 a month, utilities included except for gas/electric. The park owner handles snow removal and road maintenance. You MUST hook up to sewer. Composting toilets are not permitted.

Most of the homes are owner occupied, but there are a few that are used for vacation rentals.

Are tiny houses legal in this village?

Does this village rent out housing?

This is a test